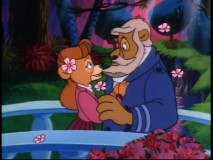 Captain William Stansbury was a 19th-century lion naval captain who crashed his clipper ship a hundred years ago onto what is now the island where Louie built his nightclub on.

His ghost haunts the nightclub when it is magically resurrected from during a casual night of carousing. Frightened off the island and back to Cape Suzette, both Baloo and Louie tell about the haunting to an overtired Rebecca who disbelieves them. Returning back with trepidation, the place is deserted until his apparition appears before them in solid form and is highly enamoured by the beautiful businesswoman. With his handsome looks and gentlemanly manners, Rebecca becomes smitten with him, but in reality he is a snobbish, judgemental and bothersome poltergeist who prevents them from leaving the island, so Baloo and Louie try to exorcise him out of the nightclub, if rather noisily. Seducing her under the moonlight with his charms during a walk on the island, the lonely ghost wants to take Rebecca away from the real world which she falls for in her tired state of mind. Finding a Book of Spells in the ruins underneath Louie's Place that will get rid of Stansbury forever and return everything back to normal, Baloo and Louie go through a series of the Captain's tricks to maintain the fantasy with Rebecca and keep them at bay which they partially succeed. After the pilot gently convinces his tearful employer that this isn't the life for her by connecting her responsibilities with Higher for Hire and her daughter Molly, Rebecca reluctantly finishes off the spell that sends the ghostly captain back into the spirit world, promising to wait for her in the afterlife. To console her broken heart, Louie gives Rebecca the painting of Stansbury that she hangs prominently on the wall in her bedroom.

He has grey combed hair, beard, and mustache, and wears blue naval uniform, red scache and a sword.

It is important to note that while Captain Stansbury is technically an antagonist, he is nothing like other TaleSpin antagonists such as Trader Moe, Covington, or Don Karnage. While most antagonists on this show are rude to nearly everyone they meet and conduct acts that they know are villainous and harmful to others, Captain Stansbury's antagonistic role comes from his loneliness and ghosthood. He wants Rebecca to stay, but he doesn't force her or threaten to harm her if she chooses not to. Unlike other antagonists, he is a well-meaning gentleman and treats well mannered people like Rebecca well, and only mistreats those who are disrespectful, like Baloo and Louie for a time. Unlike some of the other villains on this show, he has a more understandable motivation, he desires companionship.

Retrieved from "https://talespin.fandom.com/wiki/William_Stansbury?oldid=9572"
Community content is available under CC-BY-SA unless otherwise noted.