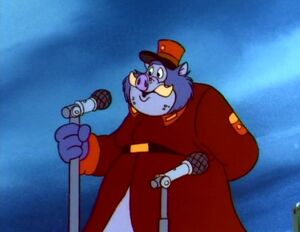 Sergeant Dunder is Colonel Ivanod Spigot's second-in-command. He was voiced by Lorenzo Music.

He's gregarious and somewhat dense like Wildcat, but nowhere near as self-centered and ruthless as Spigot is. In fact, he often friendly with Baloo and Kit. He selflessly takes the blame for many of Spigot's numerous failures, and appears a devoted soldier.