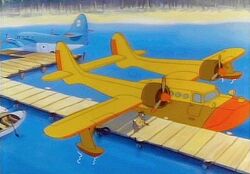 The Sea Duck is a modified Conwing L-16 seaplane, the general-purpose aircraft produced by the Conwing Aircraft Corporation, painted in yellow and red. These planes were once seen in almost every port and airfield during their heyday, but now have been nearly erased from the skies by the next generation of aircraft.

Like all Conwing L-16s, the Sea Duck is constructed in the classic L-16 design. The central fuselage is bordered by two wing assemblies attached to the upper midsection of the hull. Two long tail booms protrude from behind the engines and support the twin tail assembly. A metal partition inside the aircraft divides the Sea Duck's interior into two portions, the cockpit and the cargo hold. The cockpit area contains the primary flight instruments and control surfaces. 2 seats are bolted to the floor for the crew, a pilot and a copilot.

The cockpit panels are a mixture of both standard and modified gauges and instruments, some built by Baloo and his mechanic friend Wildcat. The various instrument surfaces are covered with all the dials, buttons, and special controls needed by the Duck's pilot to maintain smooth flight. Though Baloo prefers to hand-craft any extra utilities, he is not against purchasing equipment (such as the new, state-of-the-art Googleschlocker gyro-compass). Empty control ports can be fitted with additions such as skywriting smoke systems.

The flight controls themselves are the most modified part of the Sea Duck's cockpit. Originally two flight control wheels steered the craft — for pilot and co-pilot — but Baloo had Wildcat adjust the co-pilot's yoke to retract under the dashboard when not needed. The throttle system is located in the middle of the dash between the two seats, with trim controls mounted on the ceiling. Because the Sea Duck does not have an autopilot system, Baloo keeps the plane on course by firmly wedging a crowbar into the flight stick, leaving him free to attend to other necessary matters.

Of course, the true heart of the Duck is the cargo hold, which is accessed by a door leading to the cockpit or by the two side doors at the aft of the plane. The hold is large enough to hold up to four tons of most transportable wares. To accommodate additional passengers, three seats are bolted to the floor of the hold near the windows.

Cargo nets full of odds and ends of Baloo’s are affixed to the ceiling of the hold; other random belongings are strapped to the walls. The rear half of the hold is partitioned by a curtain, beyond which lies a storage cabinet and a double bunk bed.

A large door at the back of the hold is used for loading cargo into the Sea Duck. This door can be opened by a control panel on the nearby wall or by a duplicate switch in the cockpit. In case of mechanical failure with the door mechanism, a manual gear system on the wall can be used to open and close the hatch. On the ceiling just in front of the door is a spool of tow rope, used by Kit Cloudkicker when he wants to go "cloud-surfing."

With Wildcat's help, Baloo has customized and revamped the Sea Duck to his heart’s content. In fact, the craft has undergone so many alterations over the years that it scarcely resembles a Conwing L-16 as it would look fresh off the assembly line.

True to his nature, Baloo has installed numerous "snack centers" in the cockpit. Loaded with candy bars and sodas, these unobtrusive hatches provide ample in-flight nourishment for Baloo — at least until he can get to Louie’s for more thorough sustenance. Naturally, this also supplements the plane's emergency rations.

To pull out of steep dives, Baloo uses special dive flaps on the leading edge of the Sea Duck’s wings. Controlled by a cockpit lever, these panels open at a 90-degree angle directly into the airstream, allowing Baloo to execute amazingly tight maneuvers. This system is sometimes used to escape Air Pirates, whose CT-37 attack planes cannot pull up as sharply.

Furthermore, the Sea Duck contains many secret hatches. There is a hidden ceiling hatch on the forward hold installed directly over the cargo net (also used for catching falling objects). As for belly hatches, the Duck has two: one in the cargo hold, the other in the cockpit behind the seats. The latter is an emergency device, used primarily to jettison unwanted passengers. Another hatch in the nose of the plane leads under the flight panel into the cockpit, useful for making repairs to the controls. Additionally, an inconspicuous lid in the floor of the cargo hold — often mistaken as part of the floor's design — leads to empty water tanks in the belly of the plane which are often used as hiding places.

But perhaps the most extensively-modified part of the Sea Duck is the engine assembly. The original engines were replaced with two Superflight 100 engines. Superflight 100s are among the most powerful engines on the market, and they give the Sea Duck airspeeds unheard of for a craft its size. Even at cruising throttle, the Duck can outrace many modern cargo planes.

At one time, the Sea Duck’s engines contained a special turbocharger device so top-secret that even Baloo hesitated to use it except in extreme circumstances. Called the "overdrive," this custom-built module was an astounding feat of craftsmanship and engine technology and was capable of accelerating the Duck's engines to many times normal speed. While specific technical details are sketchy (and, it seems, undocumented), some general information is known. Incorporated into the main cylinder section of the engine is a modified turbocharger, connected to the fuel system via a special line. A button inside the cockpit activates a separate ignition system within the overdrive mechanism. Propellant accelerators increase the fuel flow to the engines, while air intake manifolds emerge from the top of the engine housing, taking in extra air to cool the rapidly-heating inner assembly. The Sea Duck may have been able to approach the sound barrier with the overdrive activated. However, use of the device caused intense heat to build up in the engines, which is why Baloo almost never used the overdrive. Today the overdrive no longer exists, having burned out when Baloo raced back to Cape Suzette to save Kit.

In the course of her travels, the Sea Duck has flown through waterfalls and volcanoes, been riddled with bullets from air pirate attacks, lost both engines over Spango-Pango, been converted into a Thembrian condo, painted blue and sold as a 50-cent lawn ornament, submerged underwater for an entire week, and completely rebuilt at least once.

The Sea Duck is currently the property of Rebecca Cunningham and serves as the main delivery plane for her cargo service, Higher for Hire.