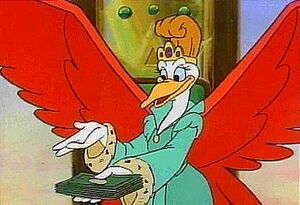 The Ruby Wings of Queen Maureen are the main object in the TaleSpin episode, "Waiders of the Wost Tweasure".

When Princess Grace's right to the throne was challenged by a long-lost cousin, Prince Rudolf, she enlisted the help of an old classmate from finishing school — Airplane Jane — to find the Ruby Wings and establish Grace's right to rule. The reward of ten thousand wubles also caught the eye of Baloo, who reluctantly teamed up with Jane to recover the wings and prove that Rudolf was an imposter. The Ruby Wings now reside on the shoulders of Queen Grace of Walla-Walla-Bing-Bang, who is intent on preserving this treasure for future successors to the throne.