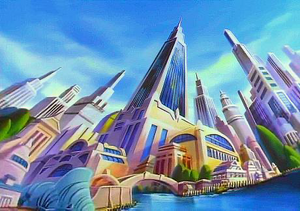 The multi-billion-dollar megacorporation known as Khan Industries has always occupied a position of prominence in the economic world. Founded before the turn of the century by the Khan family of business magnates, Khan Industries made its start in marine shipping and manufacturing, quickly becoming one of the largest and fastest-growing businesses in the harbor city of Cape Suzette. Visionary leadership and strong competitive standards contributed to the phenomenal early successes of the Khan corporation. By the time the Great War broke out, Khan Industries was recognized as a world leader in international shipping and merchandise as well as raw material production and technology.

When Shere Khan, a rising star of aviation executives, assumed control of the business shortly after the close of the Great War, he expanded upon many of the enterprises and business opportunities explored by the previous Khan chairman. Having learned well from his predecessor, Shere Khan devoted a significant portion of the company's efforts toward branching into new fields, particularly the booming post-War air cargo industry. Thanks to Chairman Khan's keen foresight, Khan Industries created the most formidable air transport fleet in modern history, giving the company a decisive edge over many of its shipping competitors.

Further solidifying the corporation's industrial base, Shere Khan aggressively pursued natural resources and mining operations through the Khan Enterprises division. He also launched expensive research and development projects concentrating primarily on aircraft design, electronics, and alternative energy sources. Many of these endeavors resulted in breakthrough achievements, most notably the Sub-Electron Amplifier project which unfortunately ended in a fiasco involving Air Pirates, an attack on Cape Suzette, and a devastating weapon known as the "lightning gun" powered by the stolen amplifier. Another widely-publicized debacle was the infamous "Auto-Aviator" incident, a short-lived business deal which nearly crippled the commercial aviation industry.

Having overcome these setbacks, Khan Industries enjoys continuing success as the biggest corporation in the world, but the company's chairman is not without his share of critics. Many in the general public resent the incredible influence Shere Khan wields over Cape Suzette through the activities of his monolithic corporation, however beneficial many services rendered by Khan Industries (utilities, gasoline, fighter planes) may be to the city's welfare and defense.

Others in corporate circles despise Khan's ruthlessness and bloodthirsty competitive streak. There are also those convinced that several of Shere Khan's assorted business ventures are not aboveboard, citing persistent rumors of illicit negotiations between Khan and the Air Pirates (in connection to a citywide fuel shortage/rate hike) as grounds for police investigation.

Dismissing these accusations as products of corporate envy, Shere Khan maintains firm control of Khan Industries, his only concern being to guide the corporation — and himself — to greater heights of prosperity, and power.

Khan Industries is headquartered in a building known simply as "Khan Tower", in the city of Cape Suzette. Both ominous and awe-inspiring, it towers over the city as a symbol of the power, strength and cunning of the corporation's leader, Shere Khan.

Shere Khan's office is on the very top floor of the tower, as it appears in several episodes. To reach it, one takes an elevator. Khan has a sizable amount of plants growing there in an indoor personal garden.

Khan Industries currently has a number of divisions and departments specializing in various major business fields, up to and including aviation engineering, water and power management, natural resources, shipping and transportation, experimental technology research and geographical observation and surveillance.

KI has a large fleet of ships at its disposal- possibly the only privately-owned corporation in the world to do so. Most of the heavier ships are called "gunships" though they seem to fit more of the battleship role. All sailors in Khan's fleet are well-trained, well-equipped, and, from what can be observed, well-paid.

Khan Industries employs a sizeable air force with both cargo and fighter pilots. Notably, Khan employs a number of black panthers, who consider themselves superior to freelance pilots.

The company's only major competitor is Miniversal. 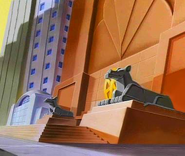 The carnivorous plants that Shere Khan feeds insects to.

The board of directors.

Khan on the podium.

One of Khan’s meeting rooms.

The research and development wing.