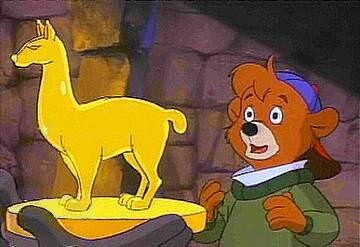 The Idol of Doom was a powerful magical artifact featured in the episode "Destiny Rides Again".

The Idol of Doom was created by a wicked sorcerer who oppressed the people of Vicuna Village in ancient times. The villagers overthrew the sorcerer but, lacking a means to destroy the idol, sealed it within a temple. According to a prophecy, a hero known as the "Great Llama" would eventually appear to recover the idol and destroy it. This legend was passed down through the family line of Una, who came to believe that Baloo was the chosen one.

Shortly after Baloo-unwillingly-started on the quest for the idol, the villainous El Gato came in pursuit. Guided by a magical bracelet and map, Baloo and Kit located the temple and located the idol. However, El Gato -more by dumb luck than anything else- caught up to them and stole the idol. Using its magic, he attempted to collapse the temple on his would be enemies, though the two were able to escape. El Gato himself was partially buried, which enabled Baloo to recover the idol, which he then took back to Una hoping she would take it off his hands. Una was unable to do so, leaving Baloo to attempt first to destroy and then to lose the cursed artifact. El Gato then caught up to Baloo again by riding on a Giant Condor, and was able to seize the idol and turn its powers against the Sea Duck. He then caused an avalanche to descend on Vicuna Village, only for Baloo to return and go on the offensive.

Baloo managed to recover the idol after unleashing a burst of defensive magic from his bracelet, and then blasted El Gato and his condor out of the sky. Returning to Una, he then used the idol's own magic to destroy it.

The Idol of Doom worked by unleashing bolts of magical energy to produce a variety of effects. These were activated by a rhyming couplet beginning with "Idol of Doom, storm and fire..." and ending with a line based on the user's desire. The idol was virtually indestructible, unleashing bolts of magic to defend itself when Baloo tried to jackhammer it to pieces. It also had the ability to fly through the air, following its last holder so as to prevent its being lost. However, it ultimately proved vulnerable to its own magical powers, with Baloo using a spell to turn it into smoke.